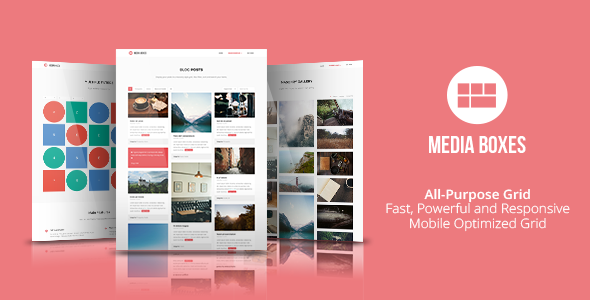 Media Boxes Portfolio is a featured jQuery grid plugin that allows you to display all kind of content in a highly powerful grid. Use it for blog posts, display media, clients, portfolios, shopping carts, galleries and all you can imagine.

it comes with a powerful filter, sorting and search system!

You can put the plugin in your existing HTML/CSS and it will automatically adapt to its container, also you can quickly customize it via CSS and HTML so it adapts to your needs.

The plugin provides you tons of options for filtering:

The plugin provides you the option to search in the current layout so you can find items very quickly, just specify what elements you want to target with the searching.

If you have a filter it will work together with the search feature, the popup and the load more feature will take in count this filtering as well.

Sort the layout in real time, you can use text, numbers and even extend it for your own desires. Make your own sorting options, there’s no limit.

You can specify for each thumbnail that for certain width you want certain height and the plugin will cut the height for you (depending on the resolution, this works as the ratio). This is very handy when you want all your thumbnails to have the same dimensions.

If you specify the ratio of the thumbnails (width x height) the plugin will show you the layout and the content without any delay, then it will load each thumbnail separately (showing a loading wheel) so it will feel like the plugin loads faster (like in the demo).

The plugin is using Isotope v2 which is currently one of the fastest grid systems with filtering out there. Also it uses the best browser features when available (CSS3 transitions and GPU acceleration) and a fallback of simple animation for older browsers

You can define the grid layout (the number of columns or the width) for different resolutions, for example maybe you want only one column for a mobile resolution, 3 columns for a tablet resolution and 5 columns for a desktop resolution.

One box can extend across several columns (usually 2), you only need to specify it, but play carefully with this option since in some resolutions you may find gaps between boxes because it may not fit perfectly all the time (according to Isotope logic).

The plugin is using Fancybox and the Magnific Popup which are very popular and powerful lightboxes/popups.

You can load a lot of stuff in the popup like images, videos, sounds, iframes, HTML text, Google maps and ajax content (It doesn’t support video/sound files like .mp4 or .mp3, they need to be iframe based, like in Youtube or SoundCloud)

You can find plenty of support in google since it is a very popular popup, for example to add swipe support or many other features.

Directly link to the popup so you can share the popup content with your friends or in your social network, just copy and paste the URL generated when you open the popup.

You can take a look to the documentation HERE